More details have emerged since the 'riots' in Rosarno at the end of last week and it now appears that the attack by local youths on Friday was the final insult in a long line of provocations.

The migrants from sub-Saharan Africa have been a common site in Italy for decades. In southern Italy they move en masse from the grape harvest in Sicily, via the orange, tangerine and kiwi harvests in Calabria and the olive picking in Apulia. Local farmers have relied on them since the 'native' agricultural workforce evaporated. Instead, the 8000 or so 'clandestini' in Calabria pick fruit and vegetables for 12 to 14 hours a day for 20 to 25 euros and many are regularly forced to pay kickback of up to a quarter of their wages to local gangsters in the 'Ndrangheta, the regional version of the mafia.

They also have to pay for the squalid abandoned building that they are forced to sleep in. In Rosarno, for example, about 1,000 were living in a disused food warehouse with 8 chemical toilets, 3 showers, no electricity and, until last year, no running water. Many are paperless, are therefore illegally employed and therefore easy targets for exploitation by farmers and gangster alike. In the words of the anti-mafia priest Luigi Ciotti, "The mafia cynically exploits the immigrants. The criminal masterminds know that clandestine immigrants will not even try to revolt because they have no ID and no state protection." Robberies and beatings at gun-point are also common. 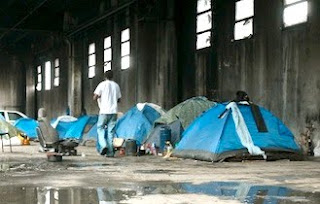 In December 2008, during the citrus harvest, an unidentified gunman walked into a factory where hundreds of the migrants were sleeping and shot 2 of them. One, a 21-year-old from the Ivory Coast, was seriously injured. As part of a peaceful protest in Rosarno, the 'clandestini' reported the attack to the police and complained about the routine robberies and shootings by 'Ndrangheta gangs they have to endure. Interestingly, one of the building they visited in that protest was the house of an old boss in the Pesce-Bellocco clan, a powerful local 'Ndrangheta, something the Calabrians would never do according to anti-mafia experts.

Now it appears that the local residents, who have for years lived peacefully alongside the seasonal migrants, turned to the 'Ndrangheta to try and drive the 'clandestini' out because of the lack of local field work. The violent reaction by the migrants to the provocation on Thursday allowed the towns people, who included a number of local 'Ndrangheta clan members according to the police, to exploit the situation and according to Luigi Manconi, a senator in the last Prodi government, turn Rosarno into "the only wholly white town in the world. Not even South African apartheid obtained such a result."

On Friday, ostensibly in response to the sit down protest by the migrants in the town square and to the cars damaged and the smashed windows, Rosarno residents occupied the town hall demanding the migrants be removed. Others armed with metal bars, wooden clubs and shotguns set up barricades and clashed with the police. Many conducted 'manhunts', beating up stray migrants. Two Africans were shot in the legs and 3 others ended up in hospital with serious injuries, one undergoing emergency brain surgery. In other incidents police arrested people for trying to run over migrants with cars and, in one case, even a bulldozer. All told, 67 people were injured: 31 immigrants, 19 police and 17 residents.

On Saturday townspeople cheered as the migrants left in buses laid on by the police, voluntarily at first but later police forcibly removed the remainder "for their own protection". Others left by train, many without collecting their pay. More than 800 were transferred to reception centres in Crotone and Bari. In Crotone, 170km away, more than half of those whose cases had been examined had temporary residence permits and will be released. The others however are destined for internment in CIEs and deportation. In scenes reminiscent of the 'Jungle' clearences in Northern France, the local Fire Brigade bulldozed the migrants' shacks and tents in the derelict factory, destroying the meagre possessions they had been forced to leave behind.

The locals were clearly happy to see the back of the 'clandestini', "We don't want them back," claimed one local landowner. "We gave the negroes clothes and food, we even gave them meals for Christmas." No one should "take us for racists" he added without recognising the irony of his comments. Also not recognising the irony of its comments, Il Giornale, the newspaper owned by Italian Prime Minister Silvio Berlusconi, asked on Saturday, "Rather than shooting negroes, shoot the mafia. Why won't Calabrians shoot the mafia? Immigrants are poor and weak, ugly and dirty, perfect targets ... Organised crime which keeps security forces in check is powerful, violent, revengeful and therefore must not be bothered." Clearly the Italian sense of humour does not translatte well.

Finally, on Saturday in nearby Gioia Tauro, a few miles from Rosarno, a group of men in a car shot another African man with an air rifle, showing that the 'problem' will not be solved by merely busing out the 'clandestini'. The locals may have wanted them gone but who will pick next year's harvest? Roberto Calderoli, a leading member of the Northern League suggests that with unemployment at 18% in the south, jobs should go to Italian citizens. Agricultural sector wages should be increased so that Italians would accept this type of work. Yet currently there is fruit rotting on the trees, fruit that the local farmers claim that they cannot afford to pay anyone to pick, even at slave-wage levels.
Posted by No Borders Brighton at 19:37