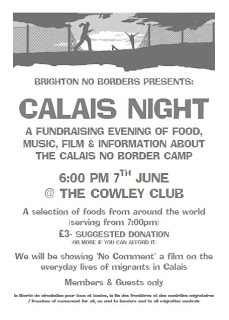 No Borders Brighton presents a night of Food, Music, Film and information on 7th June at 6:00pm - fundraising for the Calais No Border Camp which is being held 23-29th June somewhere in or around Calais.

We will be serving a selection of foods from around the world and showing the film 'No Comment', which highlights the everyday lives of migrants in and around Calais.

Come along for some good food, good music and learn about the plans for the Calais Camp.

Suggested donation for the food is £3- (or more if you can afford it) and we will be serving from 7:00pm.

Members and Guests only.
Posted by No Borders Brighton at 14:40 No comments:

In Calais there are around 800-1000 migrants at any one time that are trying to cross the Channel, under constant harassment from the police.

These migrants are harassed because they do not have the right papers, or in many cases no papers at all - they are 'sans-papier'.

These 'sans-papier' in Calais are only the tip of the iceberg: it is estimated that there are over 200,000 sans-papier in France, 1 million in the UK, and up to 7 million in Europe as a whole.

All sans-papier face the same battle - to live and work without exploitation, harassment and fear of arrest and deportation.

NoBorders calls for a world without papers, where everyone lives where they choose.

The route of the demo is the reverse of the walk that many migrants in Calais make on a daily basis - from Coquelles, where they are detained, to the lighthouse, where there is a daily food distribution.

We call on all individuals and groups that struggle for the rights of migrants to sign this call and mobilise for the demo.

The demo is part of a NoBorder camp that is taking place in Calais from 23rd to 29th June (http://calaisnoborder.eu.org).

The demo will start at 10am from the lighthouse on Boulevard des Alliés.

Contact: calais@riseup.net
Posted by No Borders Brighton at 09:41 No comments: 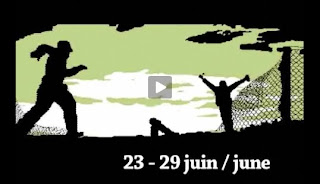 [click on the image]
Posted by No Borders Brighton at 09:58 No comments:

A five-hour blockade of Colnbrook detention centre near Heathrow airport yesterday ended with six protesters being arrested for 'obstructing the highway'. The six activists from the Stop Deportation Network had encased their arms in glass and plastic tubes and concrete blocks, blocking the entrance to Colnbrook and Harmondsworth detention centres for over four hours, in an attempt to stop the forcible deportation of 45 Iraqi refugees on a special charter flight to Iraqi Kurdistan. All six were taken to West Drayton police station near Heathrow and charged with obstruction of the highway under Section 14 of the Public Order Act.

Immediately after the blockade was removed by the police cutting team around 12:45pm, three WH Tours and Woodcock coaches were seen leaving the detention centre carrying about 45 deportees. Another 10 or so had been taken from Brook House detention centre at Gatwick earlier this morning. The time, airline and departure airport of the flight have not been disclosed by the Home Office but it is believed to have left Stanstead that afternoon.

At least three people were taken off the flight following last-minute High Court injunctions. Another man, who had not been given Removal Directions but was nonetheless being deported, was also taken off.

Earlier reports said detainees resisted being put on the coaches by taking off their cloths and refusing to leave their cells. A large number of private security guards eventually overcame them but other detainees, hearing what was going on both inside and outside Colnbrook, started a mass protest. There have not been any updates on the situation within Colnbrook since.

[Indymedia post]
Posted by No Borders Brighton at 09:16 No comments:

In recent weeks the UK Borders Agency have been carrying out a series of arrests of Iraqi Kurds. All have been put in detention centres and notified by the Home Office that they could be removed within the next 72 days, but no earlier than 15 days. It is believed that the Home Office in fact plan another mass deportation this week. [see 17 March post]

In Brook House IRC, for example, Mohammed and Serkar Khadir Rao are currently on hunger strike in protest against their deportation and those of another sixty people back to Iraqi Kurdistan. Najih Ahmed Mohammed also has not eaten food since being detained. A resident of Plymouth, he says: "I have a three year old daughter and a partner here in the UK. I came because my life was threatened by an Al Qaeda-linked group. I’ve been on hunger strike for 11 days – it’s the only thing I can do as I can’t face leaving. I’m doing this for my life and my children’s life."

Maher Salah Mohammed, who has lived in Birmingham for nearly a decade and has a wife and three year old son says: "I’ve been living here for nine years. Two weeks ago immigration officials arrested me roughly in front of my wife and son. We were all so upset. Without them I am broken. My son is asking me every day why I am not at home with him. If they deport me tomorrow I never will be again."

If, as seems likely, these detainees are deported they will be handcuffed between 2 UKBA officers or 2 hired lackeys from one of the private companies like GSL that profit from the refugees' misery and forcibly removed to their deportation flight. They have not and will not be told the date of the flight until the last minute. They will be taken with little or no warning and they will have no chance to say a final farewell to their friends and loved ones.

All have heard of the fate of previous detainees who have been returned to Iraq and wait in fear of their fate. Many of those that have not been 'disappeared' or have not been openly killed by the various armed political factions upon return, live in destitution and in constant fear of their lives. Many of them return to find that their families have fled the area and cannot be found. Others return but deliberately do not contact their families as they do not want to place them in further danger. Some of the returnees who have survived have now joined together, under the banner of the International Federation of Iraqi Refugees, to campaign against further forced mass deportations to Iraq and call on the Iraqi Kurdistan Regional Government to renege on it's agreement with the UK Government to accept deportation flights.

But it is not just the deportees that are calling for an end to these flights. In April 2009 Amnesty International released a report highlighting the corruption and dangerous, unpredictable situation in Kurdistan and states “that no one should be forcibly deported to this region”. Yet the UK government continues to ignore this, EU human rights legislation that prohibits mass deportations and all the UN recommendations against forced returns to the region.

An Amnesty International report released in April 2009 has highlighted the corruption and dangerous, unpredictable situation in Kurdistan and states “that no one should be forcibly deported to this region”. Yet the UK government continues to ignore this, EU human rights legislation that prohibits mass deportations and all the UN recommendations against forced returns to the region.

Interestingly, this new deportation flight also comes against the renewed efforts by the UK government to persuade the French to operate joint flights to Iraq, to spread the costs and the opprobrium that such flights generate.

This morning anti-deportation activists blockaded Colnbrook IRC near Heathrow, where 40-45 of the Iraqi Kurds are being held, when it was learnt that the deportation flight was due to take place today. At 10am there were 15 people blockading the road outside the detention centre.

Indymedia reports: 1, 2
Posted by No Borders Brighton at 09:28 No comments:

Joint Afghan Deportation Flights Back On The Radar?

In an article in Sunday's Nord Littoral Phil Boyle, British Consul General in Lille, seems to have let the cat out of the bag about secret negotiations between the UK and French governments about resurrecting the idea of joint deportation flights to Afghanistan.

Last November saw similar attempts to carry out a joint deportation flight founder and nearly end in a major diplomatic rift between the 2 governments, following a legal appeal to the European Court of Human Rights by French Afghan detainees. [see: November posts] The situation has not changed - collective expulsions remain contrary to the European Convention on Human Rights and most of Afghanistan itself is still declared as being "unsafe" by the UN High Commission for Refugees.

Yet this hasn't stopped the UK and French governments from seeking ways of circumventing the legal safeguards via an exchange of 'experts' in such things. And so sure is Phil Boyle that these secret talks will in fact bear fruit, he has gone public, boasting that, "Very soon I think that our governments could jointly set up flights of forced returns." Clearly his Foreign and Commonwealth Service security training has let him down!
Posted by No Borders Brighton at 14:55 No comments: