This Saturday 15 May @ the Cowley Club:

An Info Day & Fundraiser on the Deportation Machine

2-6pm Workshops: the Deportation Machine, the companies that profit from it and how to campaign against them / Frontex - the European Union borders managing agency.
Film on Frontex and short introduction to the Brussels No Border Camp
6-8pm Fundraiser Vegan meal. £4
9pm-2am Benefit gig - live reggae & gypsy bands. £3 suggested donation (members and guests only) 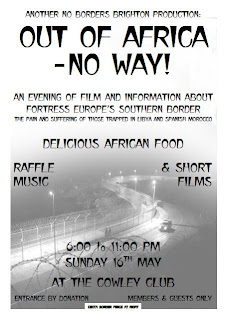 An evening of information, film, food & music based around the prevention of migration from Africa into Fortress Europe. We will be showing short films or slideshows and talks about the plight of migrants trying to enter the Spanish enclaves of Ceuta and Melilla on the northern coast of Algerian, their fate if they are successful in making it over the three 6m high parallel fences, decorated with motion sensors, cameras and watchtowers, protecting these outposts of the 'promised land' of Europe. We will also be talking and showing a short film about the situation in Libya nad the Libyan involvement in Italy's 'push back' program, where refugees trying to cross the Mediterranean to Italy are forced back to the African coast, in contravention of numerous International treaties and agreements against the 'refoulement' of refugees and into a detention system condemned across the world.

All that and delicious African food and sounds. Entrance by donation (Cowley club members and guests only).
Posted by No Borders Brighton at 10:38