Once again the Calais authorities have intervened at the Kronstadt Hanger. Yesterday the hanger reopened after activists had repaired the damage inflicted by French riot police when they stormed the building on Sunday 7 February. After the doors were opened at 10am, between 30 and 50 migrants used the building, filling it up as LibeLille* put it "with conversations and music: Kurdish dances, a cinema area, with the projection of Albert Lamorisse's film The Red Balloon, and under a garden tent (see photo) a group sat around a heater. There was tea and coffee, English, French, German and Finnish No Border campaigners, and fifty migrants, mainly Kurds and Iranians." 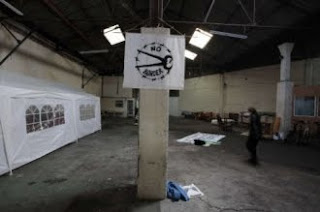 At 6pm the migrants all left as agreed to go and attend the evening food distribution, leaving 5 activists behind in the shut hanger. The police then decided to pay an uninvited visit. Of course they didn't knock on the door and wait to be invited in, instead they forced their way in again and arrested those present and took them away for the usual ID checks at the local police station, whilst other searched the hanger yet again, confiscating who knows what this time? Apparently they will be allowed back in one by one to retrieve their personal belongings.

No official documents, such as a search warrant or arrest warrants, were again shown and we are again left to wonder on what legal basic they are closing the hanger down this time. Of course, we all understand what the violence and aggression on behalf of the authorities is all for. After all No Borders activists in Calais have witnessed it being meted out to the migrants for what is now two decades. It is a war of attrition. Brutalise them enough and they just might go away. Except that the migrants are there largely out of necessity and we No Borders activists are there out of principal, unlike the mercenaries in CRS uniforms and the self-serving politicians and bureaucrats.


* The Lille version of Liberation. See also: No Border, le retour du hanger.
Posted by No Borders Brighton at 16:40